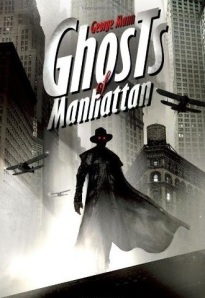 It’s the 1920s and the United States and England are locked in a chilly post-war detente. After pounding Europe into submission during World War I, the Brits are now looking across the pond to reclaim their lost colonies. Cold war paranoia, steam-powered technology, Lovecraftian monsters, flaming youth, and superheroes—there’s a lot going on in this alt-history adventure.

The author has gleefully rewritten history for maximum adventure and misadventure. He’s created a Shadow-like vigilante with a mysterious past and a convoluted code of honor. He’s given him a seemingly unstoppable supernatural villain. And he’s populated the streets of Gotham City with an incessant rub of gangsters, goons, and golems. The book is endlessly creative and reflects the author’s unchecked enthusiasm.

Fans of superheroes and Weird Heroes will definitely get a kick out of this high-flying pulp romp. There are fantastic air battles above the Manhattan skyline, lumbering “moss men,” a Roman centurion crime boss, and a tentacled monster from another dimension. There are also ghastly murders, illegal jazz clubs, sneaky fléchette weaponry, clockwork geisha girls (don’t ask), and a whole bunch of other naughty bits too. And don’t forget: there’s another British invasion looming on the horizon. Everything (and more) is in place for a long-running and satisfying series.

This entry was posted in New/Old Pulp, Published in 2010 and tagged George Mann, Ghosts of Manhattan, New Pulp. Bookmark the permalink.
%d bloggers like this: