The Gang That Couldn’t Shoot Straight

Posted on November 1, 2010 by Eerie Searleman 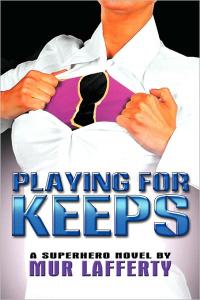 Let’s face it, superheroes (and supervillains) have all the cool powers. They control the elements. They control machines. They control your freewill. And if that’s not enough, they can be extraordinarily lucky too, just like Clever Jack.

But what if you’re a Third Wave superhero? An Academy reject who only has a wisp of talent? What if you’re a waitress who can hold a serving tray without spilling anything, or a strongman who is only strong for five second bursts? These are nice parlor tricks, but they won’t get you a keycard to the Avengers Mansion.

Every Thursday night, these Third Wave underachievers gather at Laura Branson’s bar to drink and bitch about how nobody gives them any respect. Boo hoo. Being inadequate is such a drag!

But watch out, respect is right around the corner. Branson (known affectionately as Keepsie) and a handful of her customers unexpectedly find themselves in the middle of a superhero/supervillain tug of war when they gain possession of Zupra-Ex. This volatile super drug is capable of tearing down the walls of Seventh City, and if these Third Wavers can marshal its potential, they’ll have all the respect they can handle.

The heroes and villains are cruel, and egotistical (and insane), but Keepsie and her Inferior 6ix are worth rooting for. Unfortunately, once the players are introduced and the game begins, Playing For Keeps seems a bit random. The inter-dimensional demons and the hobo army only add to the problem. Ultimately, the author has given us a Third Wave superhero novel. There’s some power here, but there’s nothing incredible, amazing, or invincible.

This entry was posted in Pre-existing and tagged Mur Lafferty, Playing For Keeps. Bookmark the permalink.
%d bloggers like this: