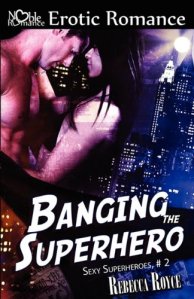 But now, quarantined in Ace Hudson’s batcave, Alice’s sexual thermometer is quickly heating up. Ace is a superhuman stud who is “the single most sexiest man” she has ever seen. When he walks out of a room, he does so with “a promising sway of his tight rear end.” A little groping, Alice figures, might be a fun way to pass the afternoon.

Danger lurks outside the bedroom, however. A supervillain by the name of the Mask has threatened to destroy “the mechanical systems of the world” unless he gets his hands on the popular top chef. And to prove how serious he is, he launches a missile attack on the United States immediately following Alice’s first tryst with her super boyfriend. A missile attack after sex? How deliciously apropos. Even bad guys have a sense of humor, apparently.

After that, things get straightened out pretty quickly. The Mask is only harassing Alice to discredit Ace and his cocky Powers, Inc., brotherhood of superheroes. And that’s basically it. The author is clearly more interested in sex than she is in violence, and her story unfolds accordingly. The romance between Alice and Ace starts off a little bumpy (she makes fun of his socks!), but the two eventually pledge their undying lust for each other. “Honey, I’ll bang you anywhere,” says Ace at the end of the book. Aw! Ain’t that sweet!

This entry was posted in Published in 2011, Romance/Erotica and tagged Banging the Superhero, Rebecca Royce. Bookmark the permalink.
%d bloggers like this: