Posted on January 1, 2012 by Eerie Searleman 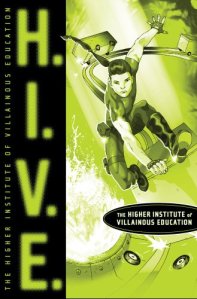 H.I.V.E. is the world’s most unique and prestigious educational establishment. Founded in the late 1960s in Iceland (and later moved to a dormant volcano in the middle of the ocean), the institute represents a state-of-the-art training facility. Its friendly and professional staff is available 24/7 to motivate and assist students strive for greater excellence. It takes the best, after all, to produce the worst.

That’s because H.I.V.E. is the world’s first and only school of applied villainy. Only the worst, the most cunning, the most mischievous kids from around the world are allowed to enroll. “The Higher Institute of Villainous Education does not train bank robbers, burglars, car thieves, or muggers,” explains Dr. Maximilian Nero, the school’s founder and controller. Instead, it prepares students to rule the world of the future. If Lex Luthor or Lord Voldemort had kids they would undoubtedly be sent to H.I.V.E.

But training criminal masterminds can be harder than it seems. It’s always a delicate balancing act for the school to produce leaders and not monsters. And sometimes the unthinkable happens. Sometimes the Alpha track teen villains aren’t so evil. Sometimes they’re actually pretty decent.

Take Otto Malpense, for example. He’s a mischievous troublemaker with “potential like an unexploded nuclear bomb.” But deep down he’s not such a bad guy. In fact, he and his friends are all sort of sweet.

We love the idea of a school for supervillains. But we were disappointed the author didn’t do much to exploit the dichotomous potential of the situation. Why, for example, did he create such a wonderfully unique environment and then immediately concoct an escape plan for Otto and his pals? As readers, we don’t want to leave H.I.V.E. We want to live there. We want to take classes in elementary evil and global domination. We want to study with Ms. Leon, the professor who’s trapped inside the body of a cat because of a semi-permanent consciousness transfer. We definitely don’t want to waste time on a silly escape plan down a laundry chute.

We were also vaguely disappointed in the cast of teen villains. Otto is the focus of the book, but it’s actually his wingman Wing Fanchu (!) who’s the most interesting character. Even Nigel, the wimpy son of Diabolus Darkdoom, has a smidge more personality. Most disappointing of all, however, is how the two female characters, Laura Brand and Shelby Trinity, are dismissed during the book’s frankenflower finale. The author barricades them inside their dorm room until the crisis is over. What a shame. Before coming to H.I.V.E., Shelby was a cat burglar infamously known as Wraith. But now she’s cowering in her room when a mutant flower takes over the school. That doesn’t sound like super villainous behavior to us. By reputation she’s a teenage Catwoman. But in reality she’s nothing but a pussycat.

This entry was posted in Pre-existing and tagged H.I.V.E., Mark Walden. Bookmark the permalink.
%d bloggers like this: