Son of a Bitch

Posted on November 3, 2012 by Eerie Searleman 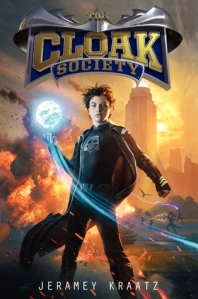 As a fourth generation member of the Cloak Society, 12-year-old Alex Knight has worked hard to achieve his super evil potential. “You don’t just fall into supervillainy,” he says, “it’s a way of life.”

Alex knows that “supervillain” is a title that’s earned, not one that’s self-ascribed. “You need to prove that you’re not just some delusional screwup who read one too many comic books. If you call yourself Captain Terror or Madam Fear, you’d better be able to live up to the name.”

As luck would have it, however, Alex’s career of evil is derailed on his very first mission. Acting suspiciously un-villainous, he uses his telekinetic powers to rescue a junior member of the Rangers of Justice. The Rangers, as it turns out, are the preeminent group of superheroes in Sterling City and the sworn enemy of the Cloak Society. What Alex did was very, very bad (or very, very good, depending on your point of view).

And that’s when things start to unravel for poor Alex. His colleagues are upset with him and everyone is having doubts about his fidelity and mettle. Worst of all, he’s incurred the wrath of his very own mother.

More than anything, The Cloak Society is a story about the discord that erupts between a mother and her son. And since this is a superhero novel, the drama between Alex and his mother quickly escalates to super histrionic levels. In fact, by the end of the book, the two are at each other’s throats in a life-or-death struggle. Frankly, we’re not sure if multiple sequels will ever patch up their mangled relationship. It’s interesting to note that the author dedicates his book to his own mother. No such strife in the Kraatz family, apparently.

The drama that enfolds between son and mother is ultra heavy, but the novel has plenty of humor too, especially at the beginning. Alex’s opening monologue is very funny and has a couple of LOL moments. The novel is also very sweet in spots. For example, the secret meeting in chapter 10 between Alex and Kirbie (the superhero he saved during his villainous debut) is terrific. Soon after this rendezvous, Alex finally figures out his place in the world. “It’s not about being a hero or a villain,” he says. It’s about being true to yourself.

This entry was posted in Published in 2012 and tagged Jeramey Kraatz, The Cloak Society. Bookmark the permalink.
%d bloggers like this: