Posted on November 7, 2014 by Eerie Searleman 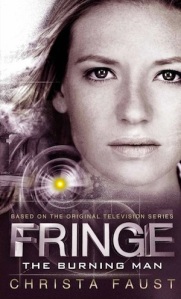 “I don’t have superpowers,” says Olivia Dunham scoffing at the notion that she was some kind of superhero. But we beg to disagree.

During the five years Fringe was on TV, and here in the second of three supplemental Fringe novels, Olivia shows a tendency to trigger electrical disturbances and fires when emotionally agitated. And her predilection for Cortexiphan-induced pyrokinetic chaos gives her the ability to cause troublesome neuroquake havoc. And, on top of everything else, she also holds the key to an alternative universe. She most definitely has superpowers. And it wouldn’t be a stretch to call her a superhero either.

The Burning Man begins in 1982 when a young Olivia Dunham unwittingly participates in Dr. Walter Bishop’s misguided experiments with a crazy drug called Cortexiphan. The novel attempts to fill in the 26-year-gap between her early years in Florida and her early years as an FBI Special Agent in Boston.

As a teenager, Olivia describes herself as a girl from the wrong side of the tracks. And that’s true. She was a kid from the ghetto with a dispirited mother and an abusive stepfather. Once her pyrokinetic superpowers emerged, however, she was whisked away to an exclusive prep school in Massachusetts—tuition paid by a mysterious tech conglomerate called Massive Dynamic.

Unfortunately, Olivia’s life doesn’t calm down once she reaches Deerborn Academy. In successive order, she is harassed by her stepfather, hunted by a serial killer, and marked for “special treatment” by a doctor who wants to beget a new race of superhuman progeny. And don’t forget about the Observers. They’re on the sidelines silently watching Olivia the whole time.

Honestly, there’s not much we liked about this book. The entire thing is a hot mess. And that’s too bad. We had minor quibbles with Christa Faust’s first Fringe novel (The Zodiac Paradox). But overall we enjoyed reading about Walter Bishop, William Bell, and Nina Sharp as a trio of bumbling hippies. This time, however, Faust never finds her groove. The novel features three separate supervillains (in three separate storylines) each with their own separate scheme to destroy Olivia. To call it disjointed would be an understatement.

But the author’s biggest stumble is her inability, despite endless stabs at character-defining exposition, to bring young Olivia Dunham to life. On the TV show, Olivia was an important part of the Fringe triumvirate. But solo, she’s barely recognizable. Admittedly, she’s a high school kid for most of the book (how many of us are fully formed by the age of 16, after all?). But Faust never truly captures Olivia’s core identity. Instead, she is called “a lonely badass.” Readers have to fill in the rest. Let’s hope this novel doesn’t become official Fringe canon. Olivia Dunham, superhero, deserves better.

This entry was posted in Movies/TV, Published in 2013 and tagged Christa Faust, Fringe, The Burning Man. Bookmark the permalink.
%d bloggers like this: