Posted on September 10, 2015 by Eerie Searleman 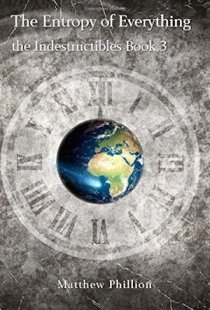 It’s the end of the world in Matthew Phillion’s latest novel. Mankind is just moments away from being wiped off the face of the planet. “Let the cats inherit the Earth,” says one remorseful minion. “The apes have done a lousy job as caretakers.”

Naturally, the Indestructibles are on the case. A terminal event is happening in an alternative timeline and they’ve been recruited by a chronomancer to save the world. “An entire future is dying due to us,” says Doctor Silence cryptically.

Everybody knows that time travel is risky business. But responsibility always comes with a terrible risk. “The only thing to do,” says Kate Miller, the Indestructibles’ brawling ballet warrior princess, “is ride the razor edge with skill and care.” In a vote of solidarity, the superkids agree to jump into the future and do their best to save the upcoming apocalypse.

Once they make the jump, the Indestructibles spend a few awkward moments adjusting to their future selves. In the ensuing 20 years, Titus grew up to become Conan the Barbarian Werewolf King. Jane became a creature of pure solar energy (sort of). Kate was now blind and dispirited. And for some reason Billy’s alien Luminae power transferred to a girl.

But the biggest shocker of all involved poor Emily. Her entropy powers became an infinite engine of global destruction. She was trapped inside a megastructure that was designed to capture a star’s exploding power. In other words, Entropy Emily had turned into a huge and unstable nuclear reactor. Her broken heart was tearing the world apart.

This is the third Indestructibles novel from author Phillion and it might be his best effort yet. As with the two previous books (read our reviews here and here), the main characters tackle weighty emotional issues with a balance of disquiet and grace. And there’s lots of humor and good writing to boot.

If anything, we can only fault the book for our own selfish reasons. We thought the author was on track to make a subtle point about the imperfection of life. In Japan they call it wabi-sabi. It’s a term that encourages a way of living that accepts the natural cycle of growth and decay. It’s mostly an untranslatable term in English, but Matthew Phillion came very close to writing the first wabi-sabi superhero novel. With a title like The Entropy of Everything, that’s what we were expecting.

This entry was posted in Published in 2015 and tagged Matthew Phillion, The Entropy of Everything, The Indestructibles. Bookmark the permalink.
%d bloggers like this: