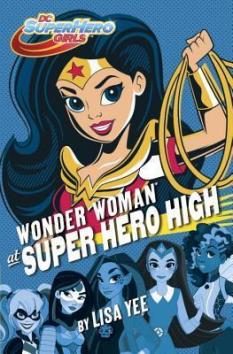 There’s a moment early in this novel when Cheetah confronts her nascent rival in the hallway of Super Hero High School. “Isn’t calling yourself Wonder Woman a bit premature?” she asks with a snarl. It’s a valid question, we suppose.

In a way, Cheetah is flipping the much-discussed confrontation between Kara Danvers and Cat Grant in an early episode of Supergirl. “I don’t want to minimize the importance of this,” said Kara to her boss. “But shouldn’t a female superhero be called Super Woman? If we call her Supergirl, something less than what she is, doesn’t that make us guilty of being anti-feminist?”

Unlike the Supergirl kerfuffle, however, Cheetah’s question isn’t rooted in any sort of feminist ideology. She’s simply mocking her classmate for using an age-inappropriate pronoun. After all, the students at Super Hero High may be able to do amazing things like fly and lift boulders, but they’re still just boys and girls. When Superman was a kid he called himself Superboy. Didn’t he? You’d think Wonder Woman would do the same thing.

In response, our plucky heroine explains: “Where I come from there’s no difference between a girl and a woman. Every girl is a woman, and every woman is a girl.” In other words, feminism and pronouns aren’t an overriding issue when you grow up on an island full of immortal Amazons. End of discussion. Drop the mic.

Still, author Lisa Yee had to figure out a way to reimage Wonder Woman as a high school girl. Her solution, in part, was to give her a cute nickname. After rejecting WoWo, Double-Double-You, and Wonderama, Yee starts calling her Wondy (from a suggestion by Harley Quinn).

Wonder Woman’s new nickname isn’t the only cute thing about this novel. The whole darn thing is cuter than a bug in a rug. Over the years, people have used all sorts of words to describe Wonder Woman: smart, strong, beautiful, kind, serious, diplomatic, and respectful (her mother Hippolyta even calls her “silly” every once in a while). But until now nobody’s ever used the word cute.

Why is that? Are creators intimidated by 75 years of continuity? Are they afraid to fiddle around with a legacy character that’s become an untouchable paragon of virtue? Can you call a symbol of feminine empowerment cute?

Whatever the case may be, we were happy to sit down and read a novel featuring a young and fallible (and cute!) Wonder Woman. For her, making friends and navigating the perils of high school was harder than redirecting a tornado in Russia, putting out a wildfire in Australia, and tidying up a landslide on Mount Fuji. She may have been Amazon royalty, but she had a lot to learn about life. Having a roommate like “the indomitable” Harley Quinn was a challenge too.

When Wonder Woman first arrived at Super Hero High School, her reputation preceded her. The exploits of the teenage warrior princess were legendary. But the truth of the matter was this: Wonder Woman didn’t want to be famous. She just wanted to be the best superhero she could possibly be. We all know how that turned out.