Comic Books Will Break Your Heart 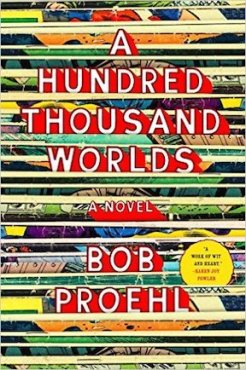 There’s a blurb on the back cover of A Hundred Thousand Worlds that sums up Bob Proehl’s novel perfectly. “This is a bighearted, inventive, exuberant debut – a Kavalier & Clay for the Comic-Con age.”

We couldn’t have said it any better. Like The Amazing Adventures of Kavalier & Clay, this is a novel where fantasy brushes up against reality. And just as Michael Chabon did in his Pulitzer Prize-winning novel, Proehl freely uses nerd code to tell his story.

A Hundred Thousand Worlds is about a mother and her nine-year-old son who travel from one comic book convention to another as they make their way from New York to Los Angeles. “Traveling,” says young Alex, “is the strongest magic word I know.”

These conventions, featuring a familiar riot of fans, cosplayers, celebrities, and comic book creators, help the pair establish their place in the universe (a hundred thousand worlds, if you will).

More importantly, this is the story of parents and children and the complicated paths they follow in life. If you looked backward, says the author, you’d see one clear path behind you. That’s the path you’ve been walking the whole time. But if you could hover in the sky for a few moments, you’d undoubtedly see billions and billions of paths not traveled. Life is like that. It’s about all the choices we make, some good and some bad.

Six years ago, Valerie Torrey made a bad choice. After a nasty divorce, she kidnapped her son Alex and moved to New York. By refusing to follow her court-ordered custody agreement she became an outlaw. She assumed a bad husband would be a bad father.

For his part, Alex was vaguely curious about his absent father, an actor on a racy TV show. To him, going to L.A. was an exciting journey to the edge of the world. To his mother, the trip was a “Conflux Across Timespace” (nerd code: Crisis on Infinite Earths).

Like all great stories, A Hundred Thousand Worlds is about beginnings and endings. Neither Valerie nor Alex knows how things will turn out when they leave New York. But they realize their lives will be changed forever when they get to California. The journey home is arguably the most powerful and enduring story any writer can tell.

During their travels westward, mother and son hook up with a motley crew of comic book creators, actors, and screenwriters who are similarly struggling to make sense of their situations. Some of these characters are thinly veiled analogues of real people. Three of the most memorable are Alan Moore, Chris Carter, and Jack Kirby. Moore comes off as a vainglorious windbag, Carter is a mercurial “idea man,” and Kirby reflects on his bittersweet career in the comic book industry. “I’m tired and I don’t believe in superheroes anymore,” he says. “Comics will break your heart.”

On the lighter side, the cosplay girls are the funniest of all the supporting characters. Together, they represent a collective voice (like a Themyscira Greek Chorus) that comments on the circus happening around them. They know their skimpy outfits are meant to escalate fanboy fervor. But they’re a wise bunch. After reading this novel, you’ll never be able to look at cosplayers the same way again.

Like so many authors these days (especially well-known writers like Chabon, Jonathan Lethem, Junot Diaz, and Ta-Nehisi Coates), Proehl grew up reading comic books. As a result, his love of sequential art and superhero continuity has crystallized his worldview unalterably. A Hundred Thousand Worlds is a fierce love story that comes with a five-day all-access Comic-Con pro badge. Its heart is as big as Hall H.

This entry was posted in Published in 2016 and tagged A Hundred Thousand Worlds, Bob Proehl. Bookmark the permalink.
%d bloggers like this: