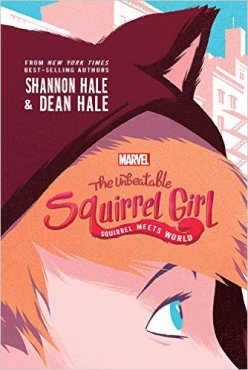 Squirrels were awesome. They were smart, fast, super strong, and had “mad leapin’ skillz.” They had great eyesight and hearing, they could live in any environment hot or cold, and they exhibited rare altruistic camaraderie. Some of them, like Rocket J. Squirrel, could even fly. After reading this funny and big-hearted book you’ll wonder why squirrels didn’t inherit the earth.

Nobody had to tell Doreen Green how awesome squirrels were. She was born with a bushy tail, a taste for nuts, and a pair of enviable incisors. As a 14-year-old girl she had the proportional strength, speed, and agility of a squirrel. Using standardized metahuman power rankings, she possessed 2.5 Rogers strength and 0.22 Maximoff speed.

At the beginning of the novel, however, Doreen had yet to embrace her Squirrel Girl super identity. Squirrels were cool, but she was just a junior high school kid with a supersized badonk. Saving the world was the responsibility of people like Thor and She-Hulk. “I have some skills,” admitted Doreen. “But it’s not like I’m Spider-Man.”

But there was trouble in her suburban neighborhood. No one followed the rules and no one did what they were told. Shady Oaks was a nightmare of unpredictability and inconvenience. Someone had to do something.

And that someone was Doreen. Along with her new pal Tippy-Toe and a devoted team of Squirrel Scouts (comprised of reformed hooligans, snobby classmates, and enthusiastic LARPers), she was able to successfully squash the evil plans of a wannabe Hydra agent.

In the process, she cemented her quirky squirrely code. Repeat after us: “I solemnly promise to never judge someone by how they look. I will defend the weak, the frightened, the small, and the fury. I will be brave and silly. I will be honest, even when it’s awkward. I will notice other people’s awesomeness. And my own. And we will be awesome together. And also save the day whenever the day needs saving.”

In the end, Doreen realized that she couldn’t suppress her true nature any longer. She was a superhero with powers of squirrel and powers of girl. Similarly, could Thor not be mighty? Could She-Hulk not be sensational? No, of course not. To Doreen, life was a great big fat nut hanging on a tree. All she had to do was jump up and grab it.

This entry was posted in Marvel/DC, Published in 2017 and tagged Dean Hale, Shannon Hale, Squirrel Girl, Squirrel Meets World. Bookmark the permalink.
%d bloggers like this: